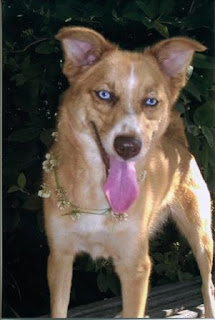 Ruby would love your votes!! You can vote ONCE A DAY and we would love it if you would. Thanks Everyone! http://www.yapstar.com/view_pets/profile/pet_webpage.php?pet_id=1316
Posted by Ellen at 9:59 AM No comments:

Kitty Bubble Bath ~ Do Not Try This At Home 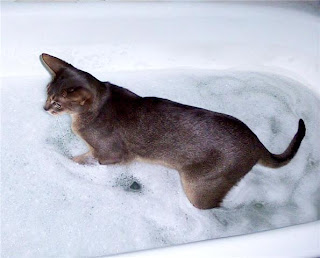 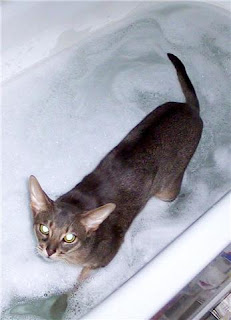 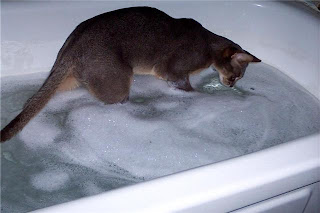 This is my blue Abyssinian, True. His registered name is True Religion, named from a song that my father and I both loved when I was little. One day I was running a bath for myself. I turned away to floss and brush and suddenly just had that feeling that 'moms' get... I turned around to find True in the tub, water running (hot only!). I could not believe it but I actually had a camera in the bathroom! I took a few shots. He was in for at least five minutes, wading, pawing at the water (which I finally turned off). I finally plucked him out and wrung out his legs and set and towel down for him to sit on to finish drying himself. I have to close the bathroom door now unless I want company. He loooves to be warm and so after I am done I open the door and he jumps into my towel which I hold open for him. I snuggle him and he closes his eyes and purrs contentedly.

Abyssinian cats are known for their wonderful purrsonalities. They are highly intelligent, affectionate, and active. They love to be up high and my tall cat tree is very well used. They come in four colors: Ruddy, Red, Blue and Fawn. I will share more photos in coming posts. Many Abys are great fetchers, too. Before I got Ruby I had not had a dog in 18 years! My wonderful Abyssinian cats filled the need nicely as they are very dog-like and did NOT need to go potty outside in a blizzard.

There are always Abyssinians available for rescue (unfortunately) at National Abyssinian Rescue, http://www.abyssinian-rescue.com/ 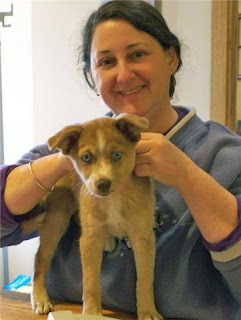 I had not had a dog in eighteen years.

I walked into the house to see the end of the midday news, just in time for The Pet of the Week. There she was on the news desk, a reddish-blonde puppy ~ with blue eyes. I had not had a dog in eighteen years! I had perfectly wonderful and very dog-like Abyssinian cats who filled the need for a dog nicely and did NOT have to go potty outside when it was sleeting. She was downtown at the Detroit branch of The Michigan Humane Society. I had the urge to go down and see her. I figured that could be cured by taking my sweet time. If I dawdled surely such a darling pup would be long gone by the time I got there.

She was not even back from the studio (oh, swell) when I arrived at the shelter, they were having too much fun playing with her. It was a first come, first served deal - IF you qualified. I began the paperwork. I was the first to arrive, though there had been many phone calls about her. At one point, my head down and writing, someone sidled up to me, opened their coat, and out popped her beautiful head. Oh, no. They took her back to the puppy room. I finished my application and was taken back to meet her while they called my vet, etc. I was reminded why I purposely stay away from looking. Cages with too old pups frantic for some exercise and attention. There she was - her cage tag said "Taffy" and "Husky/Aussie". They unlocked the cage and gave her to me and I went into a small room to test drive her. I held her upside-down. Limp. Good. I set her on the ground and sort of clapped and stomped my feet. She went into a bow and got excited. I picked her right up and turned her upside down again. She went limp and relaxed right away.

People had begun arriving to see her, the ones who had called. They were peering into the room, hands cupped around their eyes. I started to feel guilty. I did not NEED a dog. All of that WORK, expense. I walked out of the room with her in my arms and a woman said, "I need her - my son's birthday is tomorrow!" She offered to slip me cash to give the pup up to her. There were others, looking disappointed. Could they do better by this precious puppy than I?

After being grilled by one of the employees they deemed me worthy of adopting this little girl pup. It was Friday April 6, 2007. "What do you mean I can't take her until next week?" So she stayed, and on that Monday was spayed, tattooed, and microchipped. On April 10th I went back and picked up my very uncomfortable puppy, put her in a cat carrier, and came home.

First I had to stop at my friend's place of business to show her off. Here we are, that first day. She is standing on the counter and I am putting on her new cat collar with bell. More about that in another post. 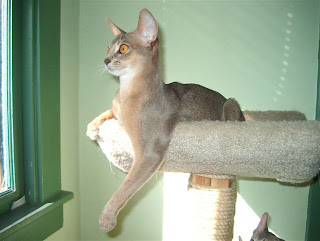 Out of sight, out of mind? No excuses. The cats are still going to the bathroom at least a couple of times a day. Imagine being a creature whose nature is to be clean. Then picture that box of grit filled with pooh and pee, take your shoes off and step on in. Delightful, eh? Just Do It! If your boxes are in the basement or hidden away, they still need to be cleaned Every Single Day.

One Cat = Two Litter Boxes. Yes, you should have at least one box per cat. And for one kitty, two boxes would be welcome. I have a cat who pees in one and poops in the other, exclusively. When I say "litter box" I mean a BIG litter box. A nice big box with lots of litter in it. Not an inch or two. You may think this is costly, but if you are cleaning it daily it lasts a really long time!

I can't tell you how many people have said to me, "my cat is pooping outside their litter box." I say, "is it clean?" Nine times out of ten their eyes look down. If your litter is nice and clean, if the boxes are big and in a safe and quiet place for kitty's privacy and there are still potty problems, it is time to get your cat to your veterinarian.
Posted by Ellen at 7:26 AM 1 comment: 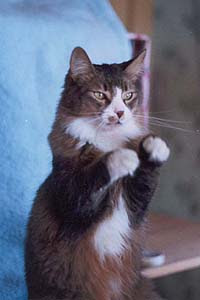 There are a few good pet food companies out there, finally. Life's Abundance is a GREAT one! There is NO corn, wheat, or soy which may not only become allergens but are undigestable by your dogs and cats! There are no by-products, either.

This is a wonderful company that truly cares about your pet's well-being and longevity. Go online and watch the great and informative video about pet food. http://www.truepetfoods.com/

I said that there are a handful of good pet food companies out there... What makes Life's Abundance unique is that orders are shipped directly to your door and it is never more than five weeks since the food was made! How long does the food you buy at the store sit on the shelf, way up high where it is hot? Try Life's Abundance, your pet companion will thank you.
Posted by Ellen at 11:46 AM No comments: